Whitfield Street is a redevelopment of an existing postmodern building in Fitzrovia in Central London into an 11,000 ft2 office development including a new façade, roof top extension, rear extensions and new rear terraces, completed in April 2016.

The office scheme is located in the Charlotte Street Conservation Area and was granted Planning Permission by Camden Council in July 2014. Brimelow McSweeney Architects’ design was inspired by the history of the locally based Pre-Raphaelite movement, using extracts from their paintings in the spandrel panels of the three bay windows on the front elevation to stunning effect.

The glazed white bricks for the Whitfield Street façade were chosen to relate no. 44 to the neighbouring buildings of which are some of traditional red brick with interesting brick bond details and some contemporary white precast stone.

The glazed white brick also relates to its former use in tight courtyards to reflect the light down towards the bottom. As with the detail of the painting on the bay windows that shows part of a turned inside-out stately piece of clothing to enhance the abstract nature of the motif, the now-front facing brick has become part of the main attraction. 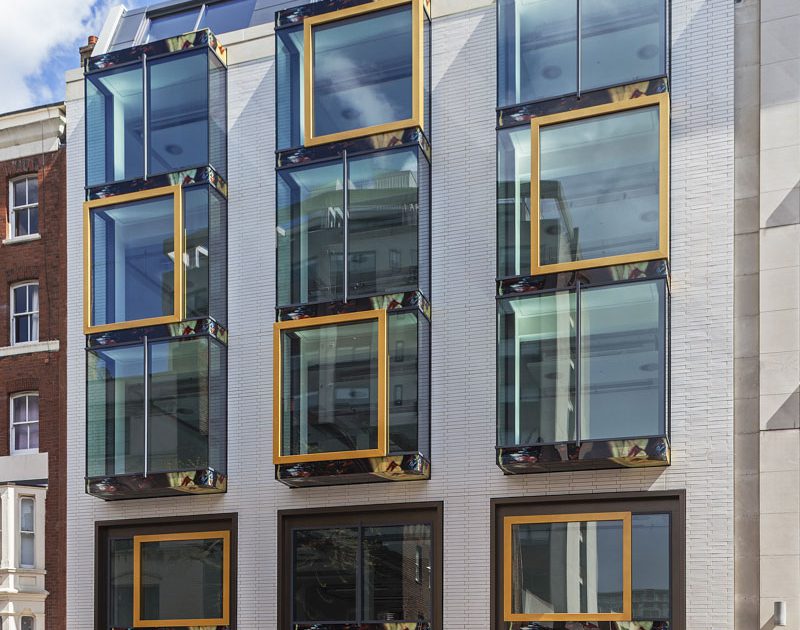 The completed building has so far received a positive reception from planners, neighbours and client and agent, as it provides a welcome refresh to Whitfield Street, and a comfortable and contemporary new office accommodation.