An extremely sensitive project in an amazing location. The site nestles amongst fields and trees within the heart of Suffolk and provides an idyllic location for relaxation and meditation in the pursuit of liberation and enlightenment.

We needed to find a brick that was natural in appearance and provided suitable back drop for the daily rituals and practices undertaken at the retreat. The bricks needed to laid in various bonds and special areas of detailing were introduced to break up the expanses of brickwork. 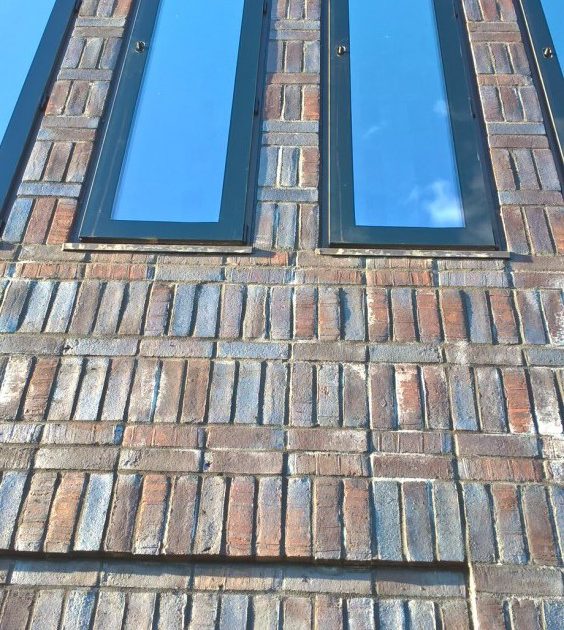 After careful consideration, a Danish waterstruck brick was used. The brick was produced in our standard brick format and features the natural curvature found on water struck bricks whilst maintain a soft surface texture. The iridescent undertone to the brick and apparent glazed surface to some pieces, make every elevation look slightly different depending on the light. Blues, purples, reds blacks and dark grey can all be seen in this one brick type.

The sampling process took an unexpected turn when the site reference panel was built with half of the bricks laid back to front. This revealed the pattern which is formed in the back of the brick and produced a texture that the client and architect were excited to see.

From an innocent mistake, a new brick type was produced and the project was completed using some of the bricks laid with the characteristic strike marks facing out.

When I last visited the retreat, the contractors were still on site and coming to an end. It was February and the Sun was shining brightly on one of those wonderful crisp Winters days that are a joy to behold.

The tranquility of the retreat is carefully balanced with the design of the new buildings, the circulation space and meditation areas. The client and architect were delighted with the brick and that is as much as anyone could ask.